The level of engagement in the UK with music learning is impressive – and the importance of the contemporary school experience is paramount. More children than adults now start to learn music in a school context (see Fig 49), suggesting that attempts to improve first access over the last two decades are proving successful. After a period of decline throughout the 1990s, this is a welcome development.

91% of child respondents have engaged in music making in the last two years – from instrumental playing and singing lessons to making music with a smartphone or tablet. But although 77% of children are engaged in group singing/playing activities in school (see Fig 50), the formal learning route is just one avenue they explore to support their musical curiosity. Half of all children surveyed have also sung or played on their own, one in five has performed to an audience and 12% have written and sung their own songs. Some 40% are making music outside of school with friends and 20% have made music using a smartphone or tablet.

Learners are taking more control of their own music making. More than two thirds of children are involved in the decision to play an instrument (see Fig 52), with enjoyment of music, wanting to learn and the sound quality of an instrument being the most popular reasons for taking one up.

Role models are an important factor with almost a quarter (24%) of child participants opting to play an instrument after seeing someone else play one. The dominant profile of pop music over other genres in digital and traditional media – coupled with young people’s independent access to these channels – is reflected in the increasing take-up of musical instruments associated with popular music genres. 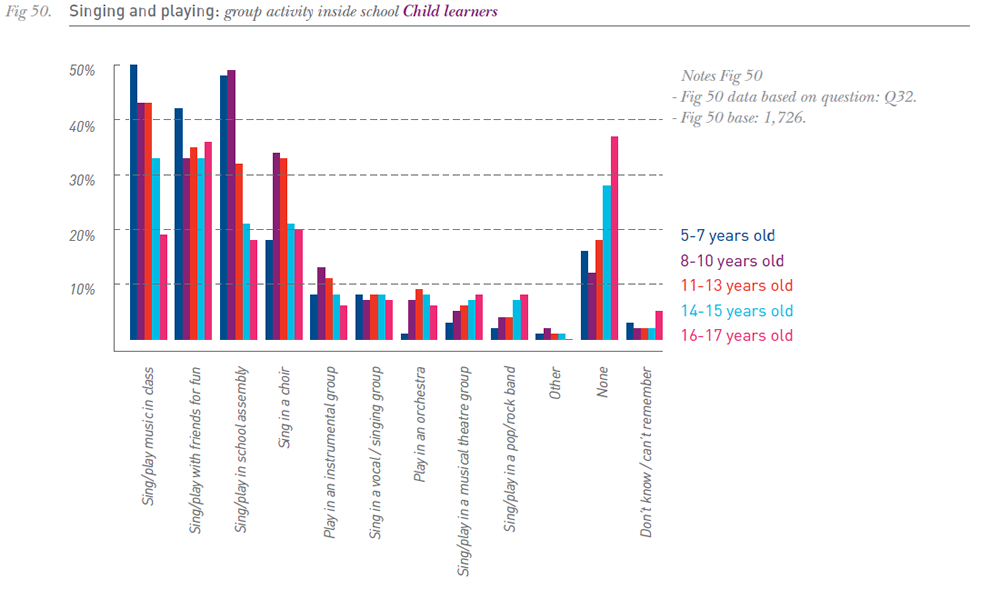 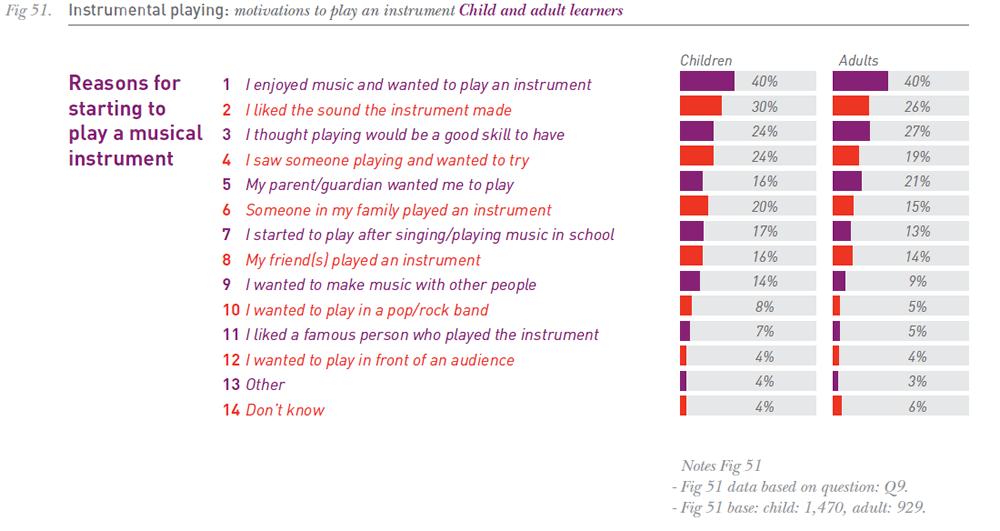 30% of children say their parents and guardians were involved in the decision to play an instrument. A lack of parental influence and involvement in such decisions suggests that young people have the confidence to make their own decisions and develop their own learning.

Parental involvement in the decision to learn an instrument falls by social grade – from 36% for children from AB backgrounds to 21% from DE households. Furthermore, for children who take private lessons, parental involvement increases to over 50%. This is understandable given the financial and time commitments that this can require. The social and financial challenges faced by parents from C1-DE social grades mean music tuition and instrument purchase are likely to be viewed as a challenge as well as an opportunity (see Fig 45).

Children from social grades C1-DE are less likely to have family and friends who play an instrument and this may provide one reason why they are less likely to start learning – given that one in five takes up an instrument because a family member plays (see Fig 53). Therefore children from households C1-DE may be more likely to be influenced by other musical and non-musical role models.

Overall, 63% of teachers cite lack of practice and motivation as a barrier to progression. Furthermore, 29% report issues around unsupportive or uninterested family members as a particular issue for those teaching in state primary schools. This implies that teachers regard the support of parents as an important factor. 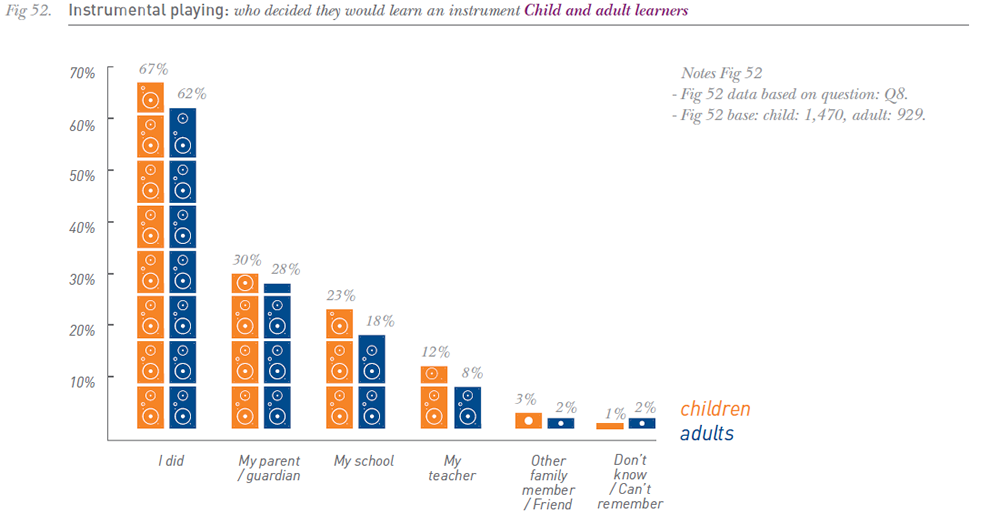 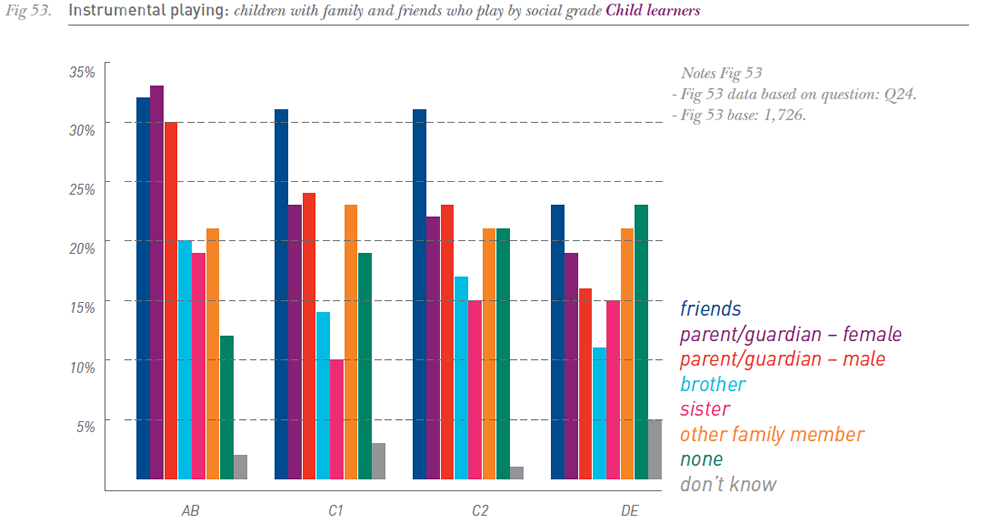 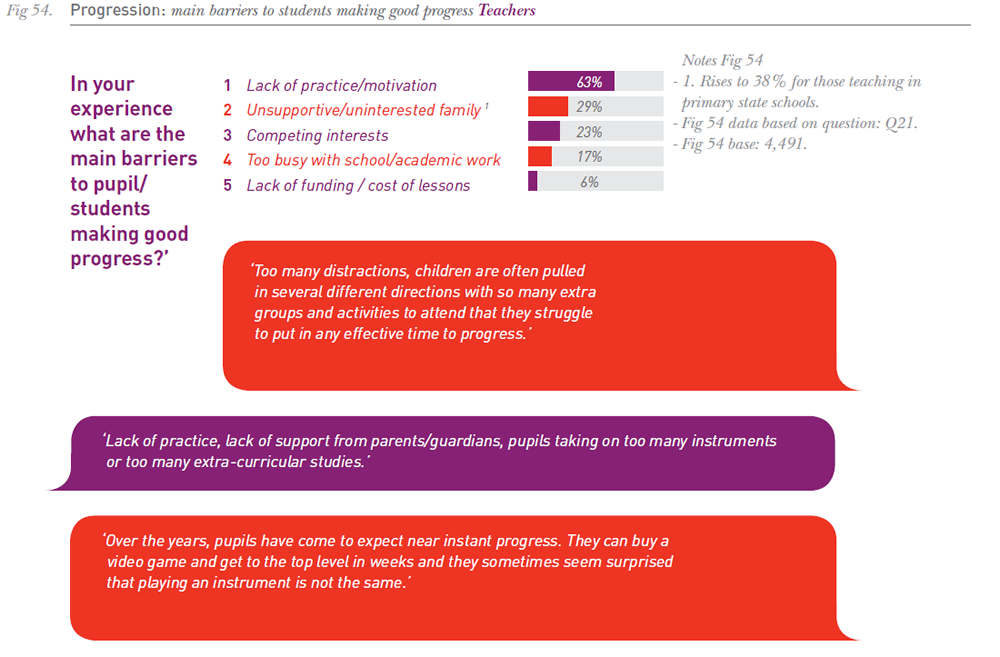 Teachers use a range of tools and techniques to measure pupils’ musical development. The majority of teachers employ discussion and questioning techniques with 67% also using practice diaries. This is particularly true for those teaching in state primary and secondary schools who are also more likely to engage in self and peer assessments.

More than one in five teachers cite perceptions of elitism and affordability as a barrier to progress. The same proportion believes that funding support is critical along with good quality teaching in schools. 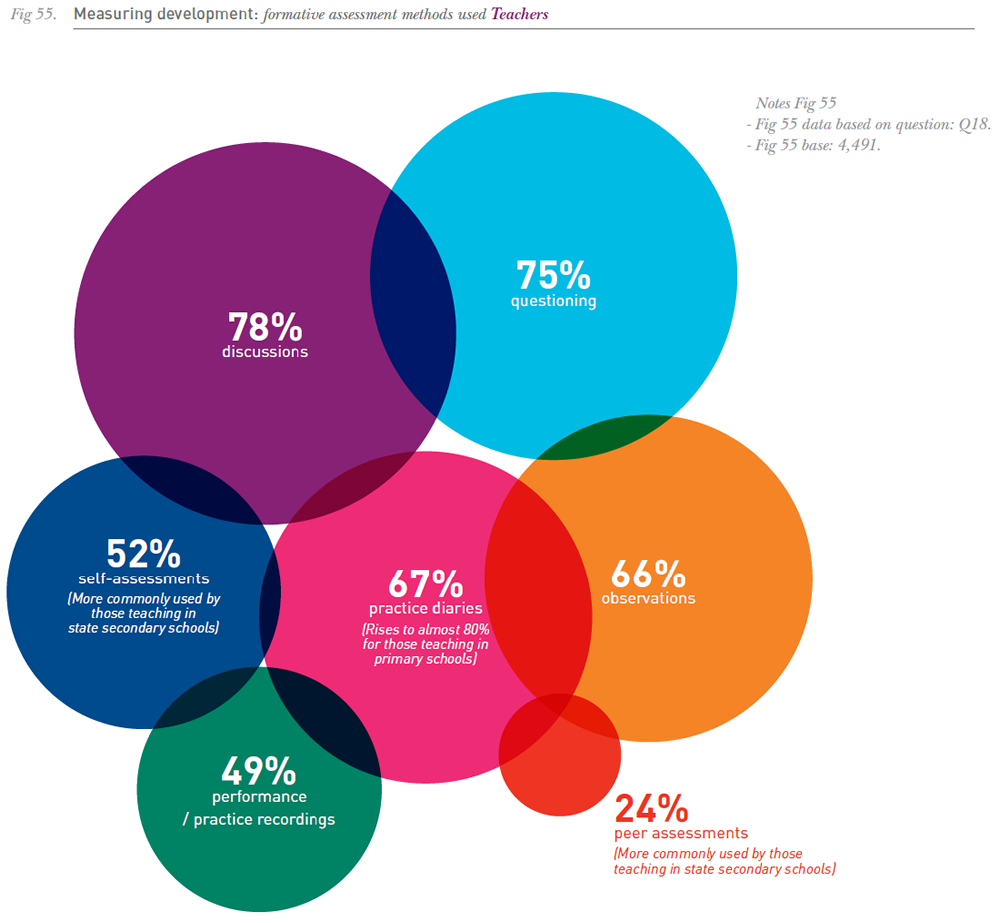 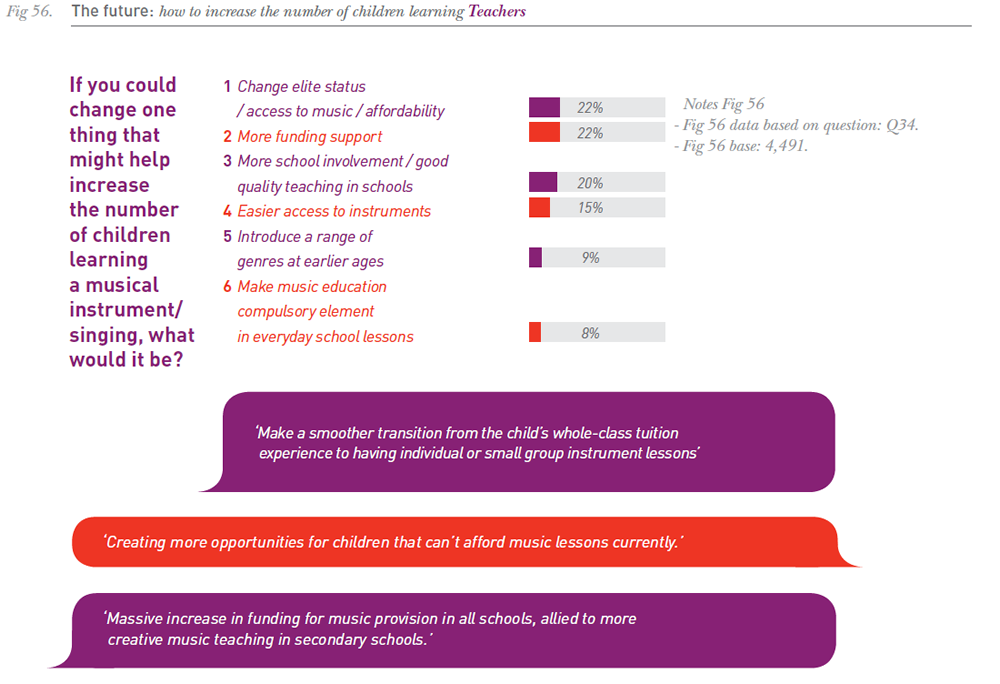 Next: 5. Behind the statistics